Twitter is a powerful marketing tool, but when used to help out charity, its use is limitless. Winnipeg Blue Bombers’ safety #31 Ian Logan wants to be the first CFL player to reach 1,000 followers on the miroblogging site.

For about the last week, Logan has been twittering that he and Hot 103’s Ace Burpee will contribute $500 combined to United Way Winnipeg when he reaches that goal.

Currently he sits at 440 followers, but according to TwitterCounter.com, his numbers are continuing to rise. It shouldn’t be too much longer until 1,000 followers is reached. 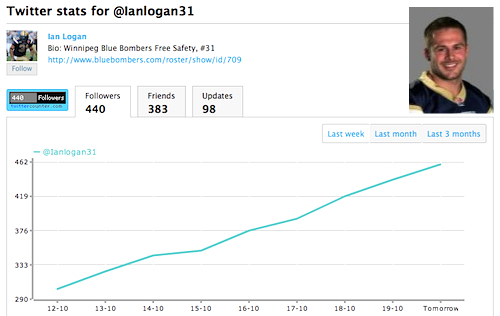 To help Ian Logan reach his goal and eventually help the United Way even more, follow @ianlogan31 on Twitter.