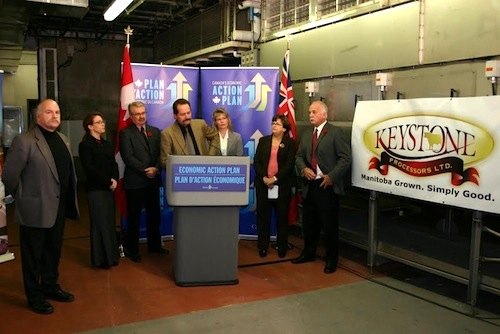 A Manitoba-based company received a big financial boost from Ottawa this morning to the tune of up to $10 million.

Federal Agriculture Minister Gerry Ritz was in Winnipeg to announce that Keystone Processors Ltd. was approved for a loan. The farmer-owned company markets premium beef from Manitoba farms to the entire world.

Manitoba Minister of Agriculture, Food and Rural Initiatives Rosann Wowchuk joined Minister Ritz to announce that the Manitoba Cattle Enhancement Council would increase its investment in the plant by up to an additional $7.5 million. The money will be used to upgrade the former pork plant on Marion Street into a federally-licensed beef slaughter and processing plant.

The company’s plans include retrofitting parts of the existing plant as well as demolishing and rebuilding older sections so the facility meets or exceeds the highest food safety protocols for domestic sales and for export markets including Asia and the European Union.

The federal funding is part of the $50 million Slaughter Improvement Program announced earlier this year.