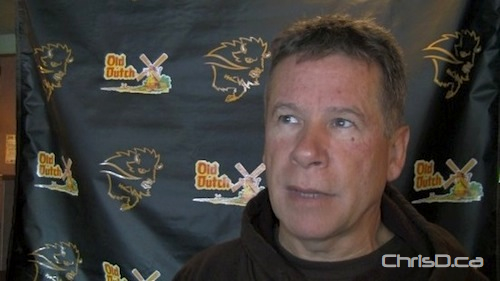 Manitoba finishes with a 5-3 record (counting the forfeit win after the Canada West decision on SFU eligibility violation) and third in Canada West.

“We are happy to end the season on a winning note,” said Bisons football head coach Brian Dobie (above). “I was proud of our team to rally and tough it out against a talented SFU team and earn this victory. Now it is a new season and we have to get ready for Calgary next weekend in the playoffs.”

Linebacker Thomas Hall made a spectacular play and his first CIS touchdown during a 59-yard interception return in the second quarter.

The Bisons return to the post-season for the first time since the 2007 Vanier Cup Championship. Manitoba will now travel to play the No. 3 ranked Calgary Dinos (7-1) in one of the two Canada West Semi-Final on Saturday, November 7 at 2 p.m. CT. The other Canada West Semi-Final football match is the No. 3 ranked Saskatchewan Huskies (7-1) host the Alberta Golden Bears (3-5) on Saturday, November 7 at 1 p.m. CT.

— With files from a news release
ChrisD.ca photo