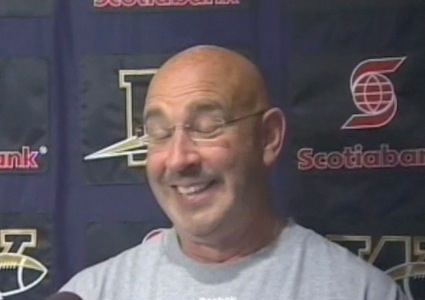 Blue Bomber head coach Mike Kelly was none too pleased with the comments made on CJOB’s post-game show Sunday afternoon after the team’s 48-13 loss to Montreal.

Speaking with Bob Irving, Kelly said it was “media bulls**t” to suggest that the team wasn’t focused during the game. He then abruptly ended the interview and handed the phone to the team’s media relations and communications coordinator Darren Cameron.

UPDATE: Mike Kelly has been fined $2,000 by the CFL for his outburst.