Home » Sports » Bisons Out of Playoffs as Wins Overturned

Bisons Out of Playoffs as Wins Overturned 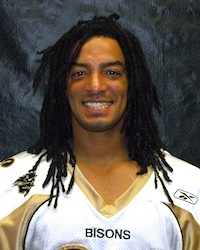 UPDATE: 4:15 p.m. — Bison Sports has since held a press conference. Watch video of their statement.

UPDATE: 11:23 a.m. — The Canada West Universities Athletic Association has overturned two wins by the Manitoba Bisons this season. The two games won over UBC and Alberta have been changed to losses and wins for the opponents. Because both Manitoba and Simon Fraser used an ineligible player during the third game, it has been declared “no contest.” Regina replaces Manitoba in the four-team Canada West playoff structure.

If the CIS rules against Manitoba, two of their previous wins this season could be stripped, crushing their current playoff spot.

The player in question is Julian Hardy (right), who was suspended in 2001 for drug use. At the time, he was a first year player at the University of Ottawa and suspended for four years. The CIS rules state that an athlete will forfeit one (1) year of eligibility for each full year he/she is suspended. Hardy played in 2008 with Manitoba, including this season.

The team voluntarily submitted the information to the league three weeks ago.

A statement sent out by Bison Sports Athletic Director Coleen Dufresne late Monday afternoon read, “Bison Sports continues to work with the Canadian Interuniversity Sport (CIS) on a self-disclosed eligibility issue related to the football team. We can not discuss any specifics related to this matter until the process is completed.”

Head coach Brian Dobie will speak to the media later this morning.