Home » Columns » Zellers Hiding Olympic Merchandise “At the Back”

Zellers Hiding Olympic Merchandise “At the Back” 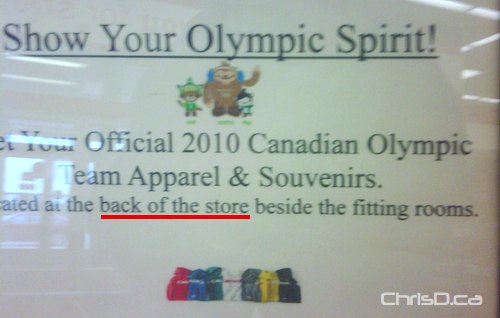 The Vancouver 2010 Olympic Winter Games are just a few months away, but if you want to pick up some apparel, it’s more like a game of hide and seek at some Winnipeg Zellers stores.

A reader snapped the above pic showing directions to the Olympic merchandise, which can be found at the back of the HBC-owned store. We’re also told it’s hidden behind some other racks of clothes and not immediately visible.

With HBC being the premiere merchandiser for winter Olympic apparel, shouldn’t this stuff be on a big display rack at the front of the store?

A store spokesperson didn’t respond to a request for comment.