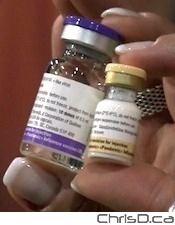 Provincial health officials confirmed today that the second wave of the H1N1 flu is underway in Manitoba.

There are currently 14 people hospitalized in intensive care with severe respiratory illnesses and 10 on ventilators. Since November 2, the number of confirmed cases of H1N1 has risen to 66.

The province has received 17,500 doses of the vaccine this week, but does not expect another shipment until next Wednesday. Those doses contributed to the immunization of nearly 160,000 Manitobans thus far, including 87,760 in Winnipeg.

At this time, the expanded priority list at all Winnipeg clinics is still in effect and regular screening is taking place. The list now includes pregnant women who can receive the non-adjuvant vaccine.

Those considering getting the H1N1 shot may be comforted in knowing that the World Health Organization has said there have been no serious side effects so far from the vaccine. Usual soreness at the injection site for a few days is considered to be the only reaction and completely normal.