Winnipeg Eatery New “In” Place for Art and Culture 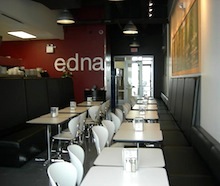 An eatery in the south end of the city which opened nearly a year ago will soon feature poetry each weekday.

edna fedya on the University of Manitoba’s Fort Garry campus features the menu from notable Winnipeg establishment Stella’s, and beginning Tuesday, will also include poetry readings, one-on-one discussions on technology and art and jazz combos between 5 p.m. and 6 p.m.


Sunday afternoons will focus on the written word, including local poets and writers sharing their work and discussing their trade. The first poetry event of the series will feature three noted Manitobans on Sunday, November 15 at 1 p.m.: David Barnard, president of the University of Manitoba; Ida Albo, managing partner of the Fort Garry Hotel; and Geoff Kirbyson of the Winnipeg Free Press.

edna fedya is located in the Smartpark. Go to the traffic lights at Chancellor Matheson and One Research Road and look for the signs directing you to “ef.”

A calendar of November events is available online.