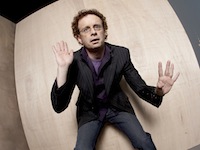 Kevin McDonald of Kids in the Hall fame is set to perform at the Gas Station Theatre on Friday night.

The Winnipeg Comedy Festival is presenting a one-man show called Hammy and the Kids.

Kevin recounts the story of his success with Kids in the Hall set against the backdrop of his childhood with Hammy — his alcoholic father. This is a sometimes sarcastic tale that is about Kevin in his twenties struggling to “make it”. It is a comedy-tragedy where even the tragic parts are full of comedy.

McDonald recently recorded an eight-part CBC miniseries Death Comes to Town with his Kids in the Hall alumni, which will air next year.

Tickets for Hammy and the Kids are $37.00 and are available for purchase at www.winnipegcomedyfestival.com or in person at the Gas Station Theatre.