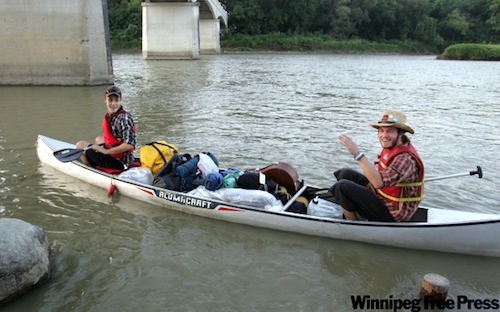 Two University of Winnipeg students had a brush with death earlier last month in Muscatine, Iowa.

Murray Jowett and Nick Turnbull (above) are canoeing from Winnipeg to New Orleans, LA and left the city on September 15.

According to KFGO 790 AM in Fargo, the pair of musicians had to be rescued from an island after their canoe was swamped by high winds and strong waves. All of their gear was lost during the ordeal, but they did manage to save their guitar and violin.

Nick’s father, Jim Turnbull, told KFGO the two are not giving up and have been busing their way to New Orleans ever since. At last check, they were in Austin, Texas.