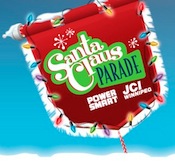 We may be experiencing mild temperatures without any sight of snow on the ground, but the annual Santa Claus Parade will take place like clockwork on Saturday.

This year it’s the 100th anniversary of the parade, which makes its way down Portage Avenue at Young Street all the way to Water Avenue beginning at 5 p.m.

Hot 103’s Ace Burpee is the Grand Marshall this year and will be tweeting photos and other information along the way.

If heading downtown and looking for parking isn’t for you, Shaw TV will be broadcasting the entire thing. Kim Babij and Meera Bahadoosingh will host the coverage, with reporter Jeff Bromley on the ground getting the crowd’s perspective.

The Winnipeg Folk Festival will host a block party featuring fire spinners and dancers from 4:30 p.m. to 5:00 p.m. on Portage Avenue between Fort Street and Main Street.

There will also be a block party in front of the CBC building at Portage and Young hosted by John Sauder and Adrienne Pan.