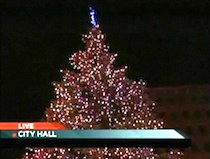 The Mayor’s Office donated $2,000 along with dozens of toys to the Salvation Army/Winnipeg Fire Department Retirees “Toy Mountain” campaign for the third consecutive year.

All fire stations in Winnipeg, as well as the Training Academy on McPhillips and the Fire Prevention Branch on St. Mary’s Road, will be collecting toys for children aged newborn to 14 years until December 18.

As mentioned previously, this year’s tree was donated from the yard of John and Lydia Klassen of Sharron Bay. The tree is decorated with over 5,000 white LED lights to shine brightly for the next several weeks.