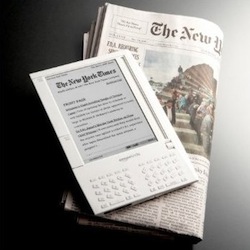 Here’s how newspapers can make more money — the Amazon Kindle.

The Kindle — for those unfamiliar — is a hand-held wireless device from Amazon that made its debut in Canada on Tuesday. The device has been popular in the U.S. for a few years now and allows bookworms to download thousands of book titles from Amazon’s digital store, including novels, magazines, newspapers and blogs. The Kindle holds 1,500 titles and relies on WiFi to obtain new material, but can be read offline once the data is downloaded.

More than 90 newspapers are available for purchase or subscription on the Kindle, including all of Canwest’s major daily papers. Also available is the New York Times, the Daily Telegraph (U.K.) and the Washington Post.

With newspapers constantly on the hunt for new ways to revolutionize their product and get it in front of more readers using today’s technology, could the Winnipeg Free Press soon be read on the Kindle? We posed that question to the newspaper’s publisher, Bob Cox. “The Free Press has an electronic edition that is widely used, especially in schools, through conventional web access on desktop and laptop computers. We expect to be able to make it available via electronic reading devices in the future. We do not yet have an agreement to be offered through amazon.com on the Kindle,” Cox told ChrisD.ca in an e-mail.

“Like all newspapers, we look forward to being able to reach a more widespread and mobile audience through such devices,” Cox added.

About 300,000 books, including bestsellers, will be made available to Canadian readers, Amazon said. The Kindle costs $259 U.S. on the company’s website.

This would make for a great Christmas gift if anyone is feeling generous towards a certain local blogger. Just sayin’.