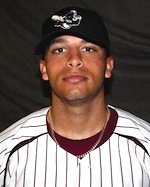 You can still see the grass on the Goldeyes’ field, but that doesn’t mean the team isn’t thinking about the upcoming season. After announcing last week that manager Rick Forney would be returning for a fifth year, the Winnipeg Goldeyes have signed their first player for 2010.

In an acquisition, two-time Northern League all-star outfielder Aharon Eggleston from the Kansas City T-Bones joined the team for pitcher Andrew Cruse and a player to be named later.

Eggleston, 28, spent the last three seasons with the T-Bones and was a big factor when Kansas City won the 2008 NL championship. A post-season all-star that year, he was an all-star again this year after batting a team-high .318 while becoming the only player in NL history to lead the league in hits in consecutive seasons.

A native of San Diego, California, the 6’0″ 200 lb Eggleston broke into baseball with Edmonton in 2005 out of NCAA Div. II Southern Arkansas.