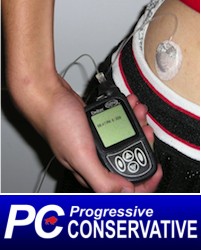 Joined at a news conference by Health Critic Myrna Driedger, Leader Hugh McFadyen said that a PC government will fund the cost of insulin pumps and supplies for children with Type 1 (juvenile) diabetes.

The PC’s plan to support families and children living with Type 1 diabetes would begin with children 18 and under who often need the help of an adult to monitor their blood sugar levels.

The average cost of one pump is $6,500 for the estimated 500 young people that need them, which would cost $2.15 million per year for pumps, supplies and maintenance. The average lifespan of each pump is approximately 5 years.

British Columbia, Newfoundland, Saskatchewan and Ontario already fund pumps for children, and two others have committed to funding it in the future.