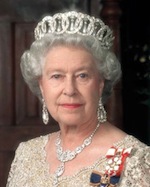 Put on your best outfit, the Queen is coming to Manitoba.

Our province is on a list of destinations that Queen Elizabeth II and Prince Philip will visit in 2010.

The announcement made Friday notes the royal visit will make stops in Nova Scotia and parts of Ontario between June 28 and July 6, with a visit to Ottawa for Canada Day highlighted for July 1.

The last time the Queen was in Manitoba was in October 2002.

A more detailed itinerary will be released at a later date.