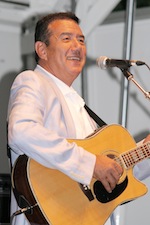 Friday night’s performance of Tom Jackson‘s “Singing for Supper” concert at St. Ignatius Church was wonderful, to say the least. All proceeds from ticket sales of this sold-out event went to support Winnipeg Harvest.

Mr. Jackson, singer, songwriter and fundraiser, is travelling all across Canada from Newfoundland to British Columbia, and to the Northwest Territories, performing and raising money for various food banks and organizations that feed the hungry.

Opening acts were singer Shannon Gaye, who wowed the audience with her beautiful vocal performance and Pear, a husband and wife team from Calgary playing their violin duets, which were a delight to hear.

David Northcott, executive director of Winnipeg Harvest, noted that his organization feeds more than 40,000 people each month, and more than half are children.

For those unable to attend Friday’s performance, you will get another chance to meet Tom Jackson and help raise much-needed funds for Winnipeg Harvest at their next fundraising event on July 14, 2010. This next event, which is appropriately called “Swinging for Supper,” will be a golf tournament.

Bruce Michalski, director of development of Winnipeg Harvest, says they are hoping 200 people will join them on the links. He states that it is not necessarily for good golfers only, as he plans to be in the rough looking for his golf ball as well.

Anyone wishing to sign up and participate is urged to call Bruce Michalski at Winnipeg Harvest at 982-3670.