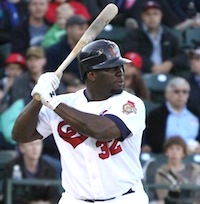 The Winnipeg Goldeyes have signed another returning player to the 2010 roster — this time, outfielder Dee Brown.

Brown, 27, signed with the Goldeyes in April following four seasons in the Nationals system. He had a career year, setting personal bests in several categories while leading the club in batting average and hits, good for third and fifth respectively in the Northern League.

A career .291 hitter in five seasons, Brown batted .322 with 12 home runs and 53 runs batted in last year. He was also one of nine Goldeyes to represent the club at the NL All-Star Game.