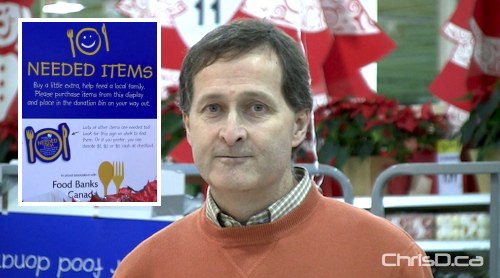 The Real Canadian Superstore kicked off their “Extra Helping” campaign Thursday to raise food and funds in the fight against hunger this holiday season. Before the campaign was officially launched, the children’s choir from Whyte Ridge Elementary School entertained shoppers at the Superstore on Bison Drive Thursday morning.

Loblaw Companies Limited will be collecting non-perishable food items and cash donations at their stores across Canada for two weeks. You can bring in your own donation, or purchase a number of pre-selected items from store shelves to put into the bin at the checkout counters.

Winnipeg Harvest and Food Banks Canada are also behind the initiative.

“Food banks across Canada are experiencing a significant increase in the number of people accessing their services,” said David Northcott (above), executive coordinator of Winnipeg Harvest. Harvest says 39,700 Manitoba residents, with 48% of them children, rely on a food bank in an average month. Food Banks Canada’s recent HungerCount study also noted the need for food banks has increased in every region. Alberta (+61%), Nova Scotia (+20%), Ontario (+19%), and Manitoba (+18%) experienced the largest increases.