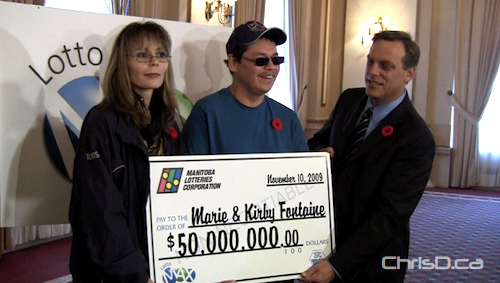 The Sagkeeng First Nation couple who won a $50 million lottery jackpot in November are having trouble trying to live the simple life they’re used to. According to a resident on the Manitoba reserve who spoke to ChrisD.ca over the weekend, Marie and Kirby Fontaine are being hounded by other residents for money. It’s said to have been getting so out of control, the Fontaines have hired security to sit outside their trailer and escort them while they tend to their daily duties.

Speaking on condition of anonymity, the resident said the Fontaines have done a number of good deeds since acquiring the winnings, such as purchasing furnished homes for their family members and beginning the planning stages of a daycare on the reserve. They have also been behind plans of a new recreational complex for youth.

Those close to the Fontaines have advised them that they may need to leave Sagkeeng if they ever want their privacy again, but they firmly reject the idea of leaving their family and friends behind.

← Previous: Our Lady Peace to Play Two Shows at the Burt Next: Red River College President Stepping Down →
Tags: Lottery