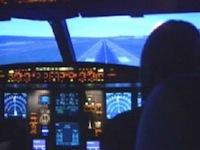 The Northwest Airlines flight that flew well beyond its destination in October was on a Canadian cockpit radio frequency — speaking to air traffic controllers in Winnipeg.

Flight 188 was travelling from San Diego to Minneapolis/St. Paul when air traffic control lost communication with the pilots for more than an hour. The pilots’ story was that they were distracted by working on their laptops looking at their upcoming flight schedules. Both pilots have had their licenses suspended by the Federal Aviation Administration.

The investigation into the incident revealed the pilots were on frequency 132.12 and not 132.17 as instructed. The mix up had them communicating with Winnipeg’s tower, according to CBS 4 News in Denver.

FAA spokesperson Laura Brown confirmed the information with CBS, saying, “We found this out afterwards about Winnipeg.”

Both pilots are appealing the decision and hope to have their licenses reinstated.