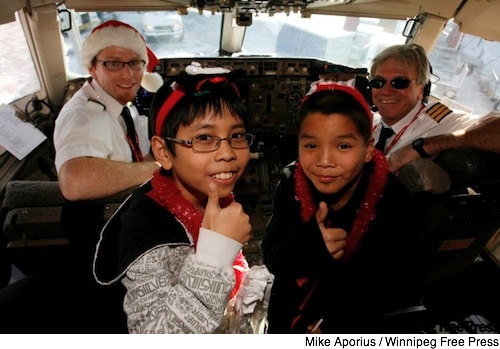 Students from John M. King and Victoria Albert Schools fly on the North Pole Express Flight from the James A. Richardson International Airport in 2008. John M. King students Marc Valino, 11, left, and Evan Hunter, 9, meet Captain Jeff Armstrong, left, and First Officer Gary Wellstead before the flight. The photo above is not of a previous Santa Flight, but a similar flight that takes place each year where Santa makes an appearance.

If you think it’s cold in Winnipeg this week … wait’ll those bound for chilly Nunavut step off the plane today.

The 6th annual Santa Flight departed Winnipeg early this morning before the sun came up to make stops in numerous Arctic communities. It’s all to make sure the children up north have a toy to open up Christmas morning. Over 5,000 pounds of toys and other items were donated last year, and organizers packed the plane full again this year.

Kivalliq Air donates the use of one of their planes each year to help those less fortunate experience a Christmas. Donations were accepted until Sunday at the airline’s office.

The flight gets back into the city around midnight, and we hope to have footage to show you on Wednesday morning.