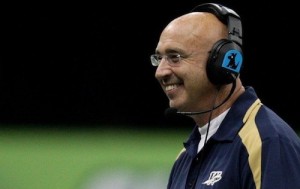 The Winnipeg Blue Bombers have fired Mike Kelly as head coach of the team following an alleged domestic dispute Thursday morning at his home near Philadelphia. Bomber chairman Ken Hildahl used more delicate wording delivering the news Thursday night, calling it being “relieved of his duties.”

According to reports, police in Bridgeport, Pennsylvania responded to a 911 call at 11:03 a.m. EST. Police discovered Kelly’s former girlfriend — Andrea Peterson — with a cut lip, redness on her neck and a cut finger. Kelly also had bruising on his face.

Kelly was arrested and charged with assault and harassment as a result of the incident. Police say he could end up spending time behind bars, but it’s still too early to tell.

Kelly was released under his own recognizance and will appear in court December 23.

Despite the drama that unfolded today, the board says they did not let Kelly go because of it. Most people you talk to would say that is the biggest lie of the year, but that’s the story the club is sticking to.

It has not been a good day in Bomberland from the beginning, as reports of the club’s president and CEO Lyle Bauer resigning started the day, before he made it official at an afternoon press conference Thursday, via speakerphone, that he would be stepping down.

The search is now on for a new head coach and president. Jim Bell, V.P. finance & administration, has assumed the temporary role to fill Bauer’s shoes.

The board will meet again on Saturday to further discuss their plans moving forward.