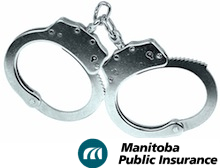 Many people are still confident enough to try and bilk money from Manitoba Public Insurance, even though the company dedicates an entire division to curb fraudulent claims. This year, five individuals can expect coal in their stocking from Santa, as they’ve made it on at least one naughty list.

MPI came out with their list of the Top Five Frauds of 2009, which they describe as being “a dubious honour bestowed annually to heighten awareness that committing auto insurance fraud is not a wise decision.”

While the insurer doesn’t publicly name the fraudsters, they break down each case in detail and explain the circumstances surrounding the fraud.

In one case, the driver of a vehicle that rolled on the Perimeter Highway received a damage claim payment from MPI. Upon discovering he had been drinking at the time of the crash, his hospital blood samples were seized and it was found that his blood alcohol concentration was between .156 and .193. He was ordered to pay back $24,442 to MPI, and was given a $2,900 fine.