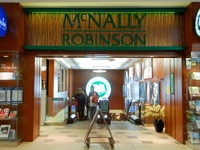 Winnipeg bookseller McNally Robinson has entered bankruptcy protection and will soon close two of its stores.

A news release read that 175 staff members will lose their jobs. Staff in Winnipeg heard the news on Monday night, and Toronto staff were notified earlier this morning.

McNally Robinson’s two other stores — its flagship location at Grant Park and a store in Saskatoon — will remain open.

In a statement on its website, the company said, “We believe our stores will continue to be among the best independent bookstores anywhere in Canada. We will continue to offer our many programs (readings, book launches, talks, autographings, book clubs, and storytimes) and we will continue to explore new avenues of service to our communities.”

The company was founded in 1981 and blames the poor economy and Internet competition for the move.