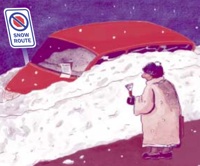 Stay clear of parking on residential streets not designated as snow routes tonight. The city says the parking ban will be in place for one more night, as crews work to plow snow between midnight and 6 a.m.

City spokesperson Michelle Bailey said in an e-mail the city won’t ticket vehicles on residential streets that have already been cleared.

The ban for snow routes will still be in effect every night between 2 a.m. and 6 a.m. until March 1.

“By tomorrow, all streets, sidewalks and back lanes will have been plowed,” Bailey said.

Residents are also reminded to clear snow ridges left by the plows, as crews will not return to clear the ridges.