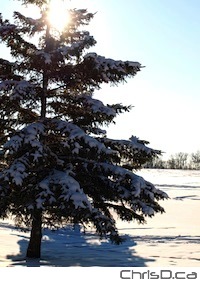 It was another day of frigid temperatures Saturday, but we’ll be treated to a slight break today as the temperatures rises a couple degrees to a high of -18°C.

An Environment Canada wind chill warning was in effect the last few days, as frostbite could have occurred within minutes. The warning ended at about 11 p.m. last night.

At The Forks, there were a few brave souls who dressed for the weather in layers and took to the skating rink and river trail.

Motorists who didn’t plug their vehicles in were stranded, as CAA reported wait times around the city of over 2 hours. The Automobile Association said they were willing to reimburse members who chose to call other tow truck companies for a boost.

It wasn’t much better out east, as the City of Toronto issued an extreme cold weather alert warning residents to take appropriate precautions before venturing out.

As most people head back to work and school Monday, the temperature will get up to -16°C by the afternoon and fall off to the mid to low teens nearing the end of the week.