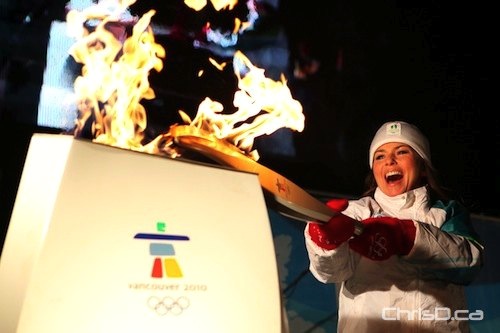 The Olympic torch will make its way through Winnipeg streets beginning at 4:30 p.m. Tuesday as part of Day 68 of the relay.

Canadian singer Shania Twain had a chance to light and carry the torch last Friday in her hometown of Timmins, Ontario (above).

Winnipeggers have a number of spots to choose from to get a glimpse of the torch, which will be carried by local torchbearers. The torch will begin its journey at Ed Golding Memorial Arena (517 Pandora Avenue East) and arrive at The Forks for a community celebration party at 7 p.m. featuring Manitoba band Doc Walker.

Then on January 7, the torch will travel down Portage Avenue to head west as part of its final leg of the relay towards Vancouver. The relay begins at Minto Armouries at 8 a.m.

Route maps have been posted for both days, and the City of Winnipeg has set up its own page to help fans find more information on where best to see it in person.

If you miss it, we’ll have a photo gallery and video from the relay later on.