Home » Columns » Manitoba Makes Another Cameo on “The Simpsons”

Manitoba Makes Another Cameo on “The Simpsons”

Manitoba is getting quite the reputation for making cameos on hit U.S. television shows. 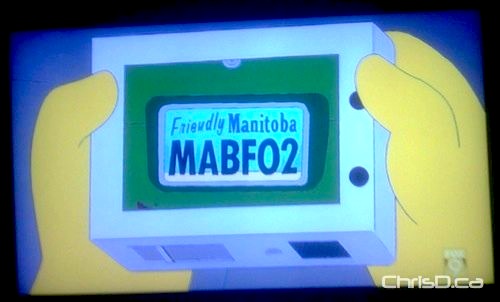 This is a frame from Sunday night’s new episode of “The Simpsons.”

It’s not the first time Winnipeg — or our province — has been mentioned on the show. Back in 2003, Homer Simpson was made an honorary citizen of Winnipeg, after learning his father was Canadian. Then in 2005, Homer took a trip to Manitoba to buy cheap prescription drugs. There’s also this classic clip, where the line, “That’s it, back to Winnipeg!” is used when a father takes his rowdy children on a road trip.

Winnipeg also received small screen fame on the NBC comedy “The Office” back in November 2008, when the entire episode took place (fictionally) in Winnipeg.