Plan Your Spot Along the Olympic Torch Relay Route 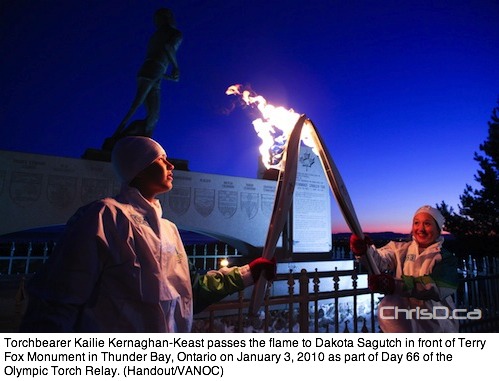 Plan to arrive early to The Forks later today as thousands will converge on the site to see the Olympic Torch Relay. The torch arrives in the city at 4:30 p.m., but the festivities will begin at 5 p.m. until  8 p.m., with a fireworks show to close out the event at The Forks.

Parking in the immediate and surrounding areas will be limited, organizers say. If you’re taking transit, make note of the delays and disruptions along the relay route.

If you want to take photos of the torchbearers, respect the security envelope that the Vancouver 2010 Integrated Security Unit have set up along the route. Each torchbearer will be surround by RCMP officers dressed in similar Olympic-style clothing. No one will be allowed within this envelope, and spectators are asked to stay off of the street in front of the torch relay. The last thing you want is to get knocked on your butt like this photographer.

A detailed map with the approximate times each torchbearer will reach a location in the city can be found at Vancouver2010.com.