Home » News » Bacteria Found on Nearly Half of All Soda Dispensers

Bacteria Found on Nearly Half of All Soda Dispensers 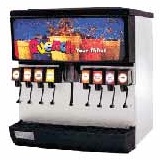 You may want to BYOS (bring your own soda) next time you visit your favourite fast food restaurant.

A new study out of the U.S. found that 48% of soda machines in fast food restaurants tested turned up coliform bacteria, which in simpler terms is fecal remnants. The study also found that the majority of the bacteria was antibiotic resistant.

It wasn’t clear whether the machines were behind the counter, or a self service kiosk.

Blogger Tom Laskawy noted that only one outbreak within the last 10 years has been linked to a soda fountain. That doesn’t include the number of cases that may go unreported.

According to a similar study here in Canada, only 12% of fountain drink dispensers tested positive for the similar bacteria.

— With files from Centers for Disease Control and Prevention & Health Canada