Home » News » Group Rallying to Save the Windsor Hotel

Group Rallying to Save the Windsor Hotel 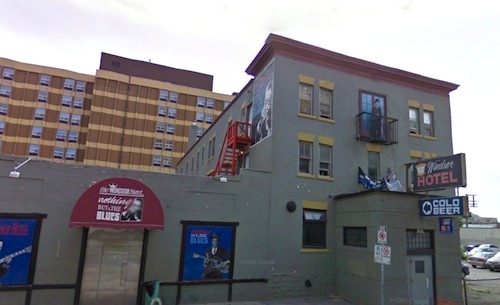 The rumoured sale and demolition of Winnipeg’s historic Windsor Hotel is not coming without severe opposition.

A group has organized a rally for 2 p.m. Saturday in front of the hotel at 187 Garry Street. According to an online petition, more than 1,000 people have signed their name to save the 107-year-old hotel from becoming a parking lot.

The hotel is best known for being a legendary blues venue, hosting such acts as Big Dave McLean, who played there for nearly 30 years.

But, if the hotel has been purchased to be a paved paradise and turned into a parking lot (cue the Counting Crows), it’s news to the city.

A spokesperson for the City of Winnipeg said they have no need to acquire any additional properties to accommodate the new WPS building on Graham. “The City is not interested in buying it (the Windsor), or Mitzi’s for that matter,” Communications Officer Michelle Bailey told ChrisD.ca.

The hotel’s owner, and manager were both unable to be reached for comment Wednesday. One thing is for sure, though, the hotel is indeed up for sale.

← Previous: Goldeyes Sign Outfielder, Pitcher for 2010 Season Next: Bacteria Found on Nearly Half of All Soda Dispensers →
Tags: Real Estate