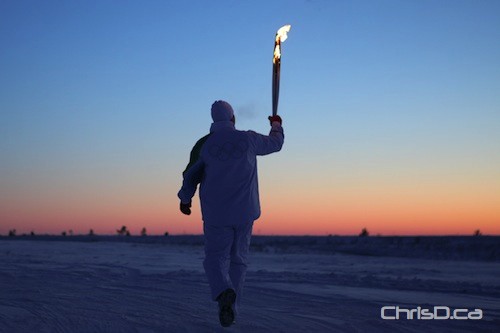 Michael Blatherwick (above) carries the Olympic flame through CFB Shilo Friday afternoon before the relay made a stop for the night in Brandon.

Community celebrations in the Wheat City were brought inside due to frigid temperatures — similar to what Portage la Prairie dealt with Thursday evening. The first torchbearer will take to the streets of Brandon at 6:48 a.m. Saturday. The torch then travels to Sioux Valley Dakota Nation and Virden, before leaving the province to head to Saskatchewan, where it makes its first stop in Moosomin at 9:40 a.m.