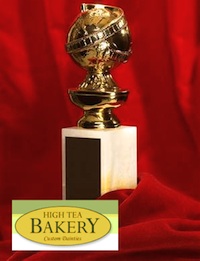 A local bakery will receive glitzy exposure south of the border in Hollywood leading up to this month’s “Golden Globe Awards.”

High Tea Bakery will showcase their imperial cookies at the Canadian Consulate’s opening reception on January 14 and the Oh Canada Premium Gift Lounge on January 15 and 16 before the award ceremonies.

The event — intended to showcase the best of what Canada has to offer in lifestyle and fashion — was organized and will be hosted by fellow Manitoba baker Heather Stewart, of Lilyfield Cakes.

“We’re excited to be part of this prestigious event,” said High Tea Bakery co-owner Carol Bigold in a news release. “We bake for Heather at Lilyfield Cakes so of course we are honoured that she invited us to take part. We have decided to showcase our best-selling imperial cookie at this event as it is a guaranteed crowd pleaser and Winnipeg’s favourite cookie.”

The almond cookies will be appropriately decorated in red and white, while sandwiching raspberry jam with an almond icing glaze. Yum!