Home » News » Nygard in Legal War with the CBC

Nygard in Legal War with the CBC 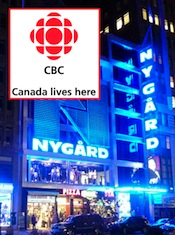 Winnipeg-based Nygard International is going after the CBC over coverage the network did of a recent grand opening of one its stores in New York.

The fashion designer recently wanted to raise its profile in the United States and opened up a location in Manhattan. For the grand opening, only a select few media outlets were invited to shoot the event, which was done carefully to protect the image of the Nygard brand. A media agreement had to be signed before any cameras were let in. This is where things turn ugly.

A correspondent for the CBC — Winnipegger David Common — showed up to the event with a cameraman ready to shoot. According to designer Peter Nygard, in an article in the New York Times, the CBC was not invited and did not sign the media agreement when asked.

Nygard said Common was found to be attempting to fasten an electronic listening device to the podium — most likely a lavalier microphone. Both Common and his cameraman were thrown out of the store, but not before returning a short time later with a Canadian flag draped over the camera.

Nygard has filed a lawsuit and wants compensation for unspecified damages, costs and for the CBC to hand over its recordings.