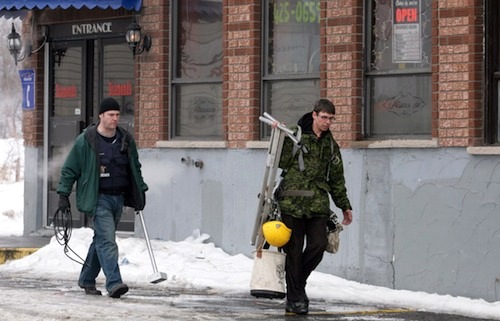 A 14-year-old illegal broadcaster in Ontario finally had his unlicensed radio station shut down on Friday.

Industry Canada and the RCMP raided the second floor of Saadé International Inn in South Gloucester — the location of the operation — and seized various pieces of equipment (above).

Jayhaed Saadé had been given several warnings leading up to the raid to shut things down, but failed to comply. The teen had set up shop in the same building where his father owns a hotel.

Mix 91.9 FM went silent on December 3, and then on again on December 14. On December 24, it began broadcasting again until Friday’s raid.

Police had a hard time gaining entry to the hotel, and had to call in a locksmith.

The father believes no charges will be laid.

Meanwhile, Jayhaed remains to spin tunes using equipment he had hidden from the RCMP and is still broadcasting online. A technician scaled a tower outside the hotel to dissemble a tower, but that hasn’t stopped an Internet audience from hearing what the 14-year-old has to say. This kid has some serious spunk.

More on this story can be found on the extensive Wikipedia page detailing the activity of CKLI-FM (unofficial call sign).