Viewer to Global TV: Apologize to the Haitian Community

A Global TV viewer is demanding an on-air apology after Monday evening’s Winnipeg newscast. According to an e-mail sent to the newsroom (and copied to ChrisD.ca), the fury lies within the ‘Question of the Day’ poll regarding yesterday’s power outage/low water pressure issue. One of the options compares the situation to Haiti. 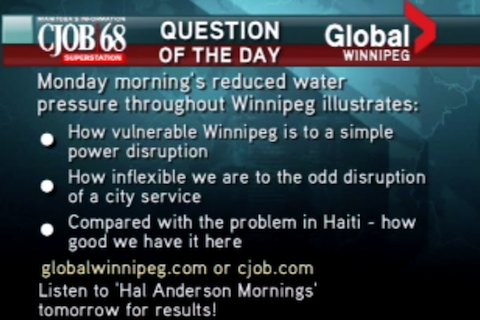 Read the e-mail below:

To Whom It May Concern,

I am writing this email to air convey disgust over tonight’s “question of the day” poll. The question asked us about our thoughts on today’s water/power debacle and one of the choices was the following: Compared with the problem in Haiti – how good we have it here.

How could the news director/programmer or whomever came up with this one, even dare think of this? Trying to compare it to Haiti? Are you kidding me? Trying to compare it to Haiti is unprofessional, heartless, and completely uncalled for; thousands upon thousands of Haitians are dead or dying, not to mention starving – including children. This option is completely appalling and shows the lengths that desperate media outlets will go to just to have something “news worthy”. Thirty minutes of no water or the lack of water pressure is nothing compared to the situation in Haiti –THEY HAVE NONE! NO CLEAN WATER, NO FOOD, NO SHELTER! Their water, unlike ours, will not be able to be turned on after a moment of minutes by our engineers. The outcome for Haiti looks bleak and our Armed Forces (not to mention many Military operations from around the world) and the tireless efforts of many wonderful organizations, such as the Red Cross, are trying everything they can do in their power to have water and food delivered to them, including building temporary shelter.

I think that Global Winnipeg and CJOB should be ashamed of themselves for even thinking of this for an option in tonight’s poll.

I am asking, no demanding, an on-air apology (and retraction) for this; especially an apology to the members of Winnipeg’s Haitian community. There may be a handful or more that are waiting to hear from their loved ones, who they might be having trouble contacting after this devastation.

News director Jon Lovlin told us he’ll follow up on the concerns that have been raised.