Home » News » The Forks Has Some Water Issues

The Forks Has Some Water Issues 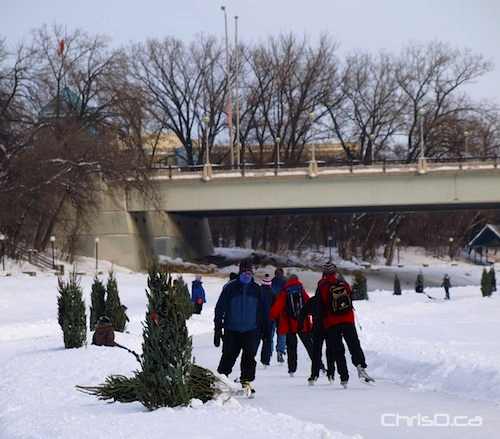 The Forks plans to officially declare the Assiniboine River trail as being open this afternoon at 2 p.m., despite having a slight melting problem.

Officials say they’re taking things in a whole new direction this year, which could see a new layout of the trail further down the river. The media notice did not state that the rink will now handle flotation devices, but anything is possible.

Holding the world record for the longest natural skating rink at 8.54 km, the possibility of going further wasn’t known on Tuesday. Water was reported to be flowing over parts of the rink near Dominion Street, which led to the closure to the Omand’s Creek access point. The mild weather over the last few weeks has made the river open up in some spots.

Despite the leakage, officials still hope to expand it further this weekend as much as possible if it cools down.

Here’s hoping John Sauder is right about that snow coming our way in a couple days. It also wouldn’t hurt if the temperatures took a little dive.

The river trail is currently open from The Forks to Hugo Street, which spans about 3 km. Ice conditions are updated daily on RiverTrail.ca.