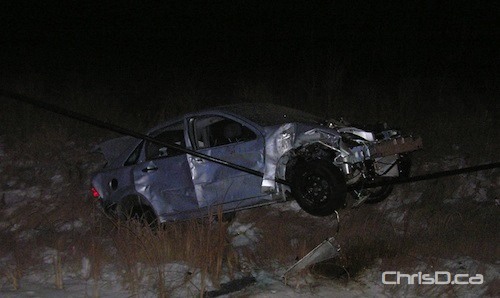 RCMP believe speed was a factor in a single-vehicle collision on Highway 9 early Thursday morning in the RM of West St. Paul.

A vehicle travelling northbound lost control on a curve in the road and hit the ditch at about 2:15 a.m. The vehicle was air bound before hitting a telephone pole, and became entangled in the wires.

A 29-year-old man from Selkirk was ejected from the vehicle and taken to Seven Oaks Hospital in stable condition with head injuries. The man has since been transferred to the Health Sciences Centre.

Traffic on Highway 9 was delayed for a few hours this morning but has since fully re-opened.

Police believe the driver was not wearing a seat belt. The investigation is continuing.