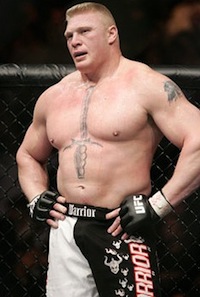 Ultimate Fighting Championship fighter Brock Lesnar is not a fan of the health care in our country, particularly in Manitoba, after being admitted to hospital in November with a mystery illness.

In an interview with ESPN on Wednesday, Lesnar compared the care he received to that of a “Third World country.” He then turned political and opposed President Barack Obama‘s plan to “socialize” medicine, if it means becoming similar to the Canadian system.

Lesnar did not specify which hospital, or even the province he was in when he turned ill, but sources in Westman told us it was definitely Brandon Regional Health Centre.

Lesnar said his wife saved his life by getting him out of the hospital and taking him back to the U.S., where he was later treated in Bismarck, North Dakota, before receiving treatment at the Mayo Clinic in Minnesota.

Lesnar has since recovered from whatever illness he was suffering from and says he’ll be back fighting again soon.