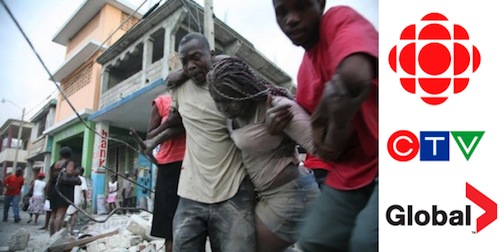 “Canada for Haiti” will air at 9 p.m. CT on CBC, CTV and Global TV, and feature dozens of Canadian actors and musicians.

Musical guests include Sarah McLachlan, Nelly Furtado, Justin Bieber and the Barenaked Ladies, among others.

Donations collected will go to a number of charities, including UNICEF Canada, the Canadian Red Cross, Oxfam Canada, Free the Children and Care Canada.

Before the Canadian show, a two-hour U.S. benefit “Hope for Haiti Now” will air on the same networks at 7 p.m. CT. The special will be hosted by George Clooney and include performances by Coldplay, Taylor Swift, Justin Timberlake, Alicia Keys, Bono and Bruce Springsteen.

The U.S. benefit will also be available on MTV, MuchMusic and National Geographic Channel.