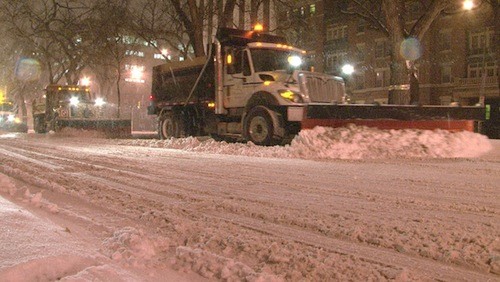 If the amount of snow predicted to fall this weekend is accurate, city crews may be plowing streets again shortly. If that’s the case, residents will now know exactly when their street will receive attention.

The city introduced a new snow mapping system Friday that will give the public access to up-to-date information on the activity of snow clearing crews.

“People who park on residential streets can now better plan because they will know when their street will be cleaned and the overnight residential parking ban is in effect,” said Bruce McPhail, Manager of Streets Maintenance. “It also means our crews will be able to get the clean-up done more efficiently, as it’s tough to do an effective job when vehicles are in the way.”

The schedule for snow plowing operations will be uploaded to Winnipeg.ca by 2 p.m. daily. Those without Internet access can receive the same information by calling 311.

The online information will be colour coded based on the status of resident streets: Red will mean streets have been scheduled to be plowed and an overnight parking ban is in effect. Black will indicate that motorists are permitted to park their vehicles on this street overnight as this street is not currently scheduled for plowing or it was plowed the day before.

According to Bruce McPhail, Winnipeg is the first city in North America to offer this service. “In fact, I’ve received numerous calls from officials in other cities who heard we were testing this system during the snowfall that hit Winnipeg last month,” he said.

← Previous: Group Plans Anti-Prorogation March in Winnipeg Next: Reporters Forced to Only Use Facebook & Twitter →
Tags: City of Winnipeg | Snow