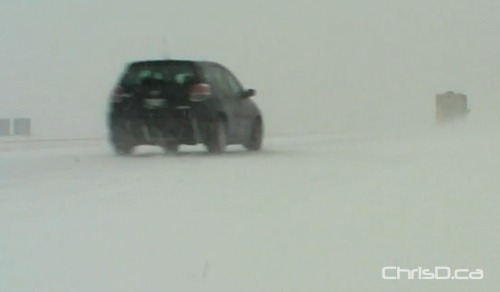 According to Environment Canada, we haven’t seen the worst of the storm just yet. The forecast is calling for an additional 5-10 cm between now and Monday before Mother Nature is finished with our province.

Between Friday and Saturday, up to 25 cm of snow fell in some areas of southern Manitoba. The poor weather and hazardous road conditions are being blamed for a fatal collision on Highway 52 in the RM of La Broquerie east of Steinbach just before noon Saturday. 38-year-old David Dik and his 35-year-old wife Elisabeth Dik were killed when their Honda Civic collided with a Chevrolet TrailBlazer.

Early Saturday morning, a 39-year-old man was killed just south of Portage la Prairie when his snowmobile collided with a tree. RCMP say heavy and drifting snow are believed to be factors in the crash.

The weather is also being blamed for a crash on the Perimeter Highway early Sunday morning when a semi overturned and jackknifed at about 3:30 a.m. It took rescue crews about 45 minutes to get the driver out. No serious injuries were reported in the accident, which occurred just near McGillivray Blvd.

← Previous: The Greatest Wedding Invitation Ever (VIDEO) Next: Manitoba Moose Taking on Kids in Game of Shinny →
Tags: Snow | Weather