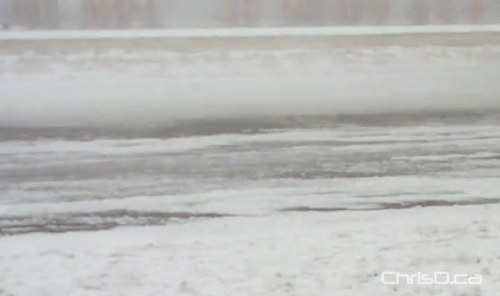 Monday is depressing enough without the weather, but factor in what it looks like outside, and no one would blame you for going back to bed.

Several highways around the province are closed, including Highway 1 from Headingley to Portage la Prairie, Highway 75 from St. Norbert to Emerson and Highway 1 east of Winnipeg at Highway 12, just to name a few.

RCMP clocked a Hummer on their radar earlier this morning going about 120 km/h on the Perimeter Highway, but cruisers cannot pursue any vehicle in this weather.

Environment Canada says conditions will remain the same for most of the day, and only begin to clear up later this evening. Near zero visibility and icy conditions are the main issuse outside the city, and in open areas.

Several rural schools have cancelled classes today, and school bus service in most of the city is suspended. Winnipeg Transit is reporting several service delays, according to their Twitter feed.

The airport isn’t experiencing any major delays, according to their website, and flights have remained on time for the most part.

If you do have to venture out, be very careful.

Have photos or video of the conditions out there? E-mail them to blizzard(at)chrisd.ca