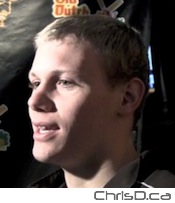 Bison swimmer Riley Pickerl earned a gold medal this past weekend in the 400m freestyle event at the 2010 Canada West Swim Championship.

The men’s team finished fifth in Lethbridge, Alberta with the women coming in sixth.

Pickerl swam the men’s 400 freestyle event with a time of 3:57.84. He managed to beat his own Bison record in the same distance that he had set earlier in the 2009-10 season.

Pickerl also earned a silver medal in the men’s 1500 free and his time of 15:47.63 set a new Manitoba Bisons team record in the 1500m, breaking an eight year old mark. The rookie swimmer also finished fifth in the 200m backstroke.