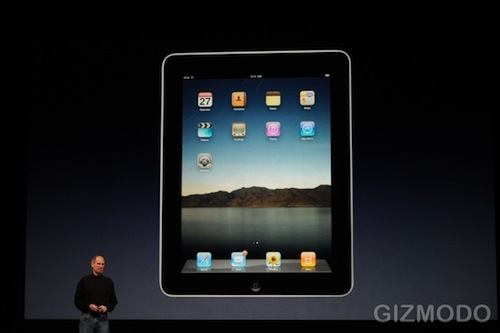 Apple announced Wednesday what many speculated their new creation to be — a tablet computing device called the iPad. CEO Steve Jobs revealed the news during a speech in San Francisco to a crowd-filled room of geeks and journalists.

A cross between a small laptop and the iPhone, the iPad virtually does what the smartphone and iPod Touch does, but on a larger scale.

At only 0.5 inches and 1.5 lbs, the iPad boasts a 9.7″ IPS display with full multi-touch screen response. Connectivity will be 802.11n Wi-Fi, and Bluetooth 2.1, with 10 hours of battery life and over a month of standby time. Impressive.

Early response has been varied, with most people on Twitter complaining about the name. Comparisons have also been drawn up to a “coloured Amazon Kindle.”

The company also announced an eBook reader app called iBooks, which it will use to display thousands of titles from partnering publishers Penquin, Harper Collins, Simon & Schuster, Macmillan and Hachette Book Group.

Data plans for the device in the U.S. are $14.99 per month for 250 MB of data, or $29.99 per month with unlimited data through AT&T. No contracts will be needed, and the user can cancel at anytime. All models will be unlocked and use GSM micro-SIMS.

A number of accessories will accompany the iPad if you wish to spend a little extra. A keyboard dock was shown off toward the end of the announcement, which allows for an external keyboard if you have a lot of typing to do. A protective case and attachments for USB and SD card connectivity are also available.

International availability in Canada will be in the June-July timeframe, Jobs said. The iPad will begin shipping in 60 days for U.S. customers.