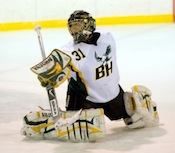 In preparation for the 2010 Olympics, a local school’s hockey team will take on the pros this Friday at Dakota Community Centre.

“We are all really excited and a bit nervous to play against the Swiss Olympic Team,” said Tess Dusik, Co-Captain of the BH Blazers Prep Team. “It will be a game to remember for the rest of our lives. Europeans are more commonly known for their play making and skating abilities and we’re known for gritty, hard-working and physical play. It will be interesting to see how the two teams’ cultures evolve on the ice and to watch them compete later on TV and think, we played them.”