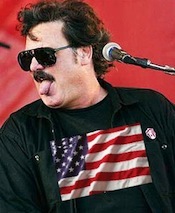 The singer, 62, passed his U.S. citizenship test earlier today in California, where he received top marks for his knowledge of the country.

Cummings said on his blog he will be sworn in towards the middle of March.

As for what he plans to do first as an American … “I’m gonna come home, rev up my Yamaha 88, and do the best version of Marvin Gaye’s version of “The Star Spangled Banner” ever…and I’m not gonna record it…I’m just gonna sing it for me and the U.S.A.”

He ended the post by signing it “Future Yankee.”

Congrats, Burton! We’d tell him to turn off his keyboard’s caps locks button for future posts, but he may be already packing heat.