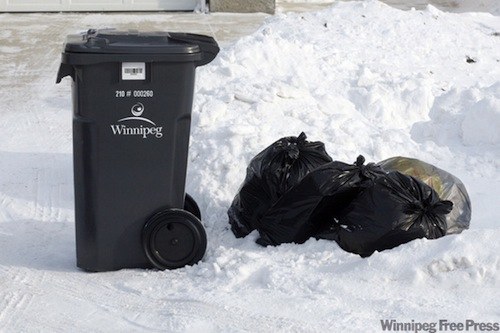 Tuesday was the first day residents in the northwest area of Winnipeg experienced using their new automated garbage bins. Reaction from homeowners was mostly negative if you watched any of the three newscasts last night.

Those who did not get their trash picked up — because they had too many bags — organized a little operation Tuesday evening in the Garden City area. Homeowners rounded up the many bags that wouldn’t fit in their bins and met behind a local shopping centre in the area. At 8 p.m. they dumped approximately 26 bags of trash inside a private bin.

One resident named Gerry (he didn’t want to give his last name) told ChrisD.ca in an e-mail, “We’re sticking it to them.” It wasn’t clear if he meant the City of Winnipeg, or the company who handles the trash (BFI Canada). Gerry also included these humourous lines: “They give us all these rules to follow. I work all day… do I need to take an after hours class to familiarize myself with how to move a bin to the street.” Classic.

“Why am I paying taxes if the city won’t pick up my garbage? It’s (expletive) absurd.” Upset residents said they will continue to privately dump their trash in bins around the city, or just leave it on the street to protest a lack of space in the new bins. Each bin holds three bags and must shut tightly for crews to pick it up.

Later this month about 42,000 homes in the city will be using the new bins. Officials hope to have the new program in place citywide by 2013.

Hopefully the smelly situation and tempers of angry residents die down by then.