Home » News » Several Manitobans to be Awarded Medals of Bravery

Several Manitobans to be Awarded Medals of Bravery 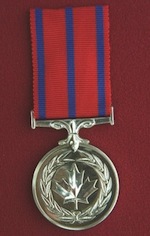 A handful of Manitobans will gather in Ottawa later today to receive Medals of Bravery from Governor General Michaëlle Jean at Rideau Hall.

The decorative honours are given out to recipients who perform acts of bravery in hazardous circumstances.

Backstory of the recipients:

Gerard Beernaerts and Deborah Ann Chiborak of Winnipeg — On April 17, 2007, Deborah Chiborak and bus driver Gerard Beernaerts rescued an elderly woman who was pinned beneath her motorized scooter in the path of an oncoming train, in Winnipeg, Manitoba. Witnessing the scene, Ms. Chiborak and Mr. Beernaerts lifted the scooter off the victim, grabbed her around the waist and pulled her from the tracks, seconds before the train arrived. While the victim was unharmed, Ms. Chiborak suffered back injuries during the rescue.

Gerry Kuczek and Wayne Kuczek of Winnipeg and Harry Prymak of St. Clements, Manitoba — On March 24, 2007, Shaun Harper, Gerry Kuczek, Wayne Kuczek and Harry Prymak rescued a man from a possible drowning after his snowmobile went through the ice on a river in Lac du Bonnet, Manitoba. Mr. Prymak crawled out to the victim and grabbed him, but the ice broke and he too found himself in the water. The other rescuers tossed ropes and lifejackets to them, and tried pulling them out, but the ice kept breaking away. Struggling atop the fragile surface, they succeeded, with difficulty, in pulling Mr. Prymak and the snowmobiler to safety.

RCMP Corporal James Allan Munro of Dauphin, Manitoba — On June 4, 2005, Corporal James Munro, then constable, rescued a man from a burning apartment building, in Flin Flon, Manitoba. While on patrol in the area, Corporal Munro noticed the fire, called the fire department and proceeded to alert the residents. Not getting a response to his calls, he kicked in the door of one of the apartments, entered, and was soon overcome by the thick, black smoke and intense heat. He crawled inside to locate the semi-conscious occupant and dragged him to safety. Corporal Munro continued to alert other residents and assist in extinguishing the fire until all the residents had been safely evacuated.